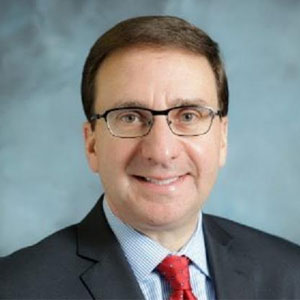 The State of Illinois began an ambitious journey in late 2015 to transform and modernize technology.

For decades, the state operated with antiquated systems that lacked reporting and historically functioned in silos, with a lack of interoperability. The disparate IT environment consisted of hundreds of solutions that created duplicative processes hindering the efficiency of the State.

When Governor Bruce Rauner took office in 2015, he placed IT modernization as one of the key strategies of his new administration. A first step in the process was to analyze the current state of technology, which included over 400 different financial, payroll and grant management solutions across approximately 80 different government entities. The environment included 3,000 total applications, 30,000 server instances, 7 data centers and over 1,700 IT employees spread across the state helping the government deliver services to citizens and businesses.

Additionally, at the beginning of the journey, more than 5 petabytes of data existed, 1 percent of citizen interaction points were mobile enabled, less than 2 percent of the state’s computing workload existed in the cloud and approximately 2 percent of the state agencies were effectively utilizing data analytics. That, along with an out-of-balance cost to delivery structure, heightened the need to improve information technology. While the landscape was daunting and the goals ambitious, Illinois set out on a transformation journey.

The transformation effort in Illinois is built upon the IllinoisFIRST IT strategy that focuses on Fast, Innovative, Responsive, Smarter Technology deployment, all built upon the concepts of establishing a borderless culture for IT across the state and breaking the effort down into a series of 75-day sprints with the premise of running IT as a business.

The borderless culture is an important aspect of driving transformation deep enough in the organization so that it becomes sustainable for the future. The culture effort cannot be simply a check mark on a project plan, as it needs to engage the entire team and not just the IT team. It also needs to leverage the relationship with major businesses and companies in the state as well as work closely with universities and innovation centers. Done through advisory boards, meetings, hackathons and other methods, we come together as a state to solve our collective challenges and opportunities.

The journey is built on four key foundational pillars, moving to a common back-office enterprise ERP system, transforming the business of IT, going-mobile in Illinois and establishing a statewide data analytics practice. Working with leading strategy and systems integrators, the initial results have been positive and astounding for the state. As a team, we have worked to remove some of the traditional barriers of IT and moved it to a full services model. Some of the early results include the following;

• Selected SAP Hana Enterprise Cloud solution and implemented it for the initial (4) pilot agencies in just 15 months.
• Launched a new Department of Innovation & Technology (DoIT); the almost 1,700-person-organization represents a $1B technology investment annually and is overseen by an Advisory Board of Directors made up of 13 business leaders from across the state. Focused on key threads of transformation including governance, applications rationalization, infrastructure modernization, service delivery management, talent management and communications.
• Launched a “Going Mobile in Illinois” initiative focused on delivering 1 new app a month for state agencies. In the first six months, we ended up launching 25 new apps/mobile responsive websites across Illinois that can be accessed via the IllinoisFIRST mobile app available free for download from the Android and Apple app stores.
• Established a statewide data analytics practice, hiring the state’s first chief data officer and first data scientist. Delivered the new Ed360 (Education 360) solution providing cross state data regarding students’ performance. In addition, executed an enterprise memorandum of understanding (eMou) that enables agencies to share data statewide.

Cybersecurity is also a key part of this journey as the state named our first CISO for Illinois and embarked on an aggressive plan of education, eradication and preventive measures around information security. Progress is occurring quickly and it is crucial that we continue to build and maintain a robust cybersecurity capability, which can keep pace with the ever-increasing threats. 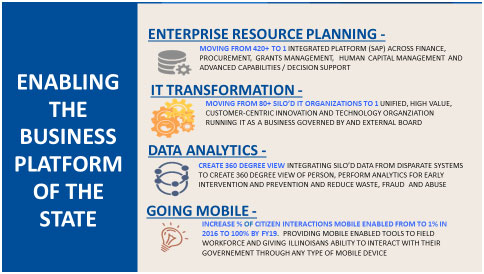 In state government, you cannot overlook the sheer challenges associated with procurement. As part of the transformation journey, the Department of Innovation & Technology, working with the state’s Central Management Services (CMS) and the statewide Chief Procurement Officer (CPO), has taken on responsibility for statewide master IT contracts and has negotiated major agreements or published RFPs and RFIs for services that can be used by all government entities across Illinois, such as key technology enablers including cloud computing, smart street lighting and advanced emerging technology segments including blockchain/distributed ledger technologies. 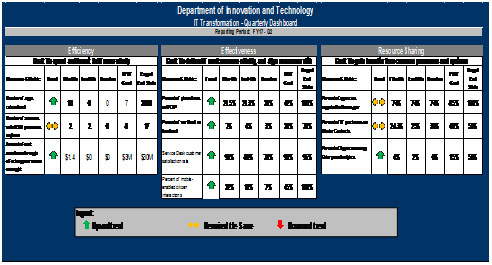 Establishing the DoIT Rhythm of the Business is a key focus of the transformation and to help support the borderless culture, it has included transparency and visibility pertaining to the progress of the agency to date. As part of that, another key step in the transformation journey and our commitment to run IT as a Business, is the establishment of key performance indicators for the new technology agency and making those KPIs available and visible at any time.

The KPIs are delivered and reviewed as part of the quarterly business reviews (QBRs) held for each of the states‘(7) verticals, where the 80+ agency leaders participate and review progress to date. The KPIs for the new agency include the following;

Progress is quickly being achieved in our new statewide agency. At the beginning of 2017, 22 percent  of citizen interaction points became mobile enabled, 7 percent of the workload moved to the cloud and 4 percent  of agencies began using data analytics. In addition, a 93 percent satisfaction rating from users of our solutions was achieved in the most recent quarter.

Transformation is not a destination but a journey and in Illinois, while we have a lot of hard work still in front of us, we are making continuous, noted sustainable progress running IT as a business.